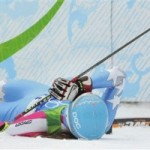 Mars rules athletics and competitions. So when the Winter Olympics is held during a Mars retrograde, one might expect the difficult and strange. The crash and death of the Georgian luger, Norda Kumaritashvili, made for an unsettling beginning—echoed symbolically by the fourth leg of the Olympic cauldron failing to rise. Lindsey Vonn, arguably the best female skier in the world, suffered a serious shin injury, a fall, a broken finger, and dashed hopes for five golds. The phenomenal Dutch speed skater Sven Kramer was on his way to gold when his coach sent him to the wrong lane and disqualified him. Small bumps cheated a few South Korean skaters out of their medals. Canada lost to the US in hockey. And curling, of all things, has been drawing a huge audience.

And why not? Watching men shout and slide stones into painted circles as their pals furiously sweep the ice is oddly comforting. The retrograde has thrown pauses, frustrations, and challenges at many of us, which may be why NBC’s coverage is enjoying such huge ratings. We’ve heard you Mars: we’re sitting things out and watching other people push themselves until it’s time for us to go cautiously forward again (on March 10).

Mars rules my third house of communication. I’m no athlete, but I’d hoped to do a little metaphorical skating and soaring in my writerly life. Instead I suffered a long string of third house computer difficulties. After several problem-filled weeks, I’ve found my computer macho. I’m feeling good, strong even, braver and better than before. I can now download a new operating system, install a new modem and wireless card, trouble-shoot wobbly software and a recalcitrant printer, and find the answer to almost any technical question on Google. It’s nothing that would earn me a gold medal; still I count my new learning as a definite prize. I hope you won something good during Mars retrograde too!

Dana’s writing… brings the meaning of the planets to life like no other writer in this field. She’s the Meryl Streep of astrological writers: smart, sane, and insightful...”
Jeff Jawer, The Mountain Astrologer

Lessons in Astrology as Magic

In Wonderland: The Houses of Your Chart

Goldilocks is an Aries